What Is The Best Month To Buy Diamonds?
February 04, 2021
tags
Shira diamonds

Everything You Need To Know About Asscher Cut Diamonds

There are so many gemstones out there with every bit of fascinating glitter and shimmer, but there is nothing like diamonds.

Unsurprisingly, this precious stone is also considered the hardest natural material in the world.

But more than its hardness, diamonds are most known for the eternal beauty that make it very popular globally.

Throughout the year’s thanks to its popularity, diamonds have undergone several design developments.

And in the 4Cs of diamond quality, cut quality is arguably on top of the list in terms of this development.

Since it is extremely hard to cut this very hard stone, its cut is highly valued.

Among the available cuts done by jewelers, one has pretty much stood the test of time and has achieved a rare feat of being named after its founding gem cutters – Asscher cut diamonds.

What are Asscher Cut Diamonds?

Every time iconic actress Elizabeth Taylor walks down the red carpet, spectators can always expect a satisfying spectacle of beauty and grace.

What also greatly contributed to her fame aside from her acting skills is her impeccable taste in fashion.

A refined taste that she would often pair with expensive jewelry that would always make the headlines.

But among her collections, there is one that is so popular that even a Wikipedia page is solely dedicated to it.

The Elizabeth Taylor Diamond, previously known as the Krupp Diamond, is an Asscher cut diamond.

This Asscher cut diamond is one of the most popular diamonds that ever existed. But what exactly is this quality and why did famous people like the late Ms. Taylor love it so much?

The original Asscher cut is characterized by its square or octagonal shape when viewed from above with its layered facets.

It has either 50 or 58 facets, making it highly coveted among patrons and collectors. The stone’s step cut was made in such a way that an observer’s gaze is fixated in the center where you would see its best sparkle.

Oftentimes, it is compared to the emerald cut because of some similarities in appearance.

In the early to mid-1900s, this diamond was associated with the Art Deco movement.

As the industry of diamond cutting is ever so competitive, it is only logical that gem cutter and jeweler companies reinvent their designs.

And so it was roughly 100 years later from the first inception of Asscher cut when the cut was redesigned and improved by the Asscher family.

This time, the Royal Asscher Cut was invented. This reinvention made the Asscher cut very popular and in-demand once again in modern times.

In terms of appearance, the Royal Asscher Cut can be subjectively described as more beautiful and flashy compared to its predecessor cut design.

This is because more facets have been added to the original cut. From the 50 or 58 facets, the Royal Cut has over 74 facets with a higher crown. 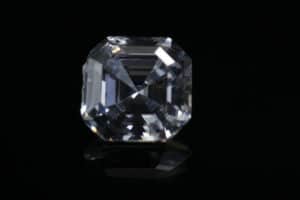 Advantages of the Asscher Cut

Like any other diamond cut, the Asscher offers multiple great advantages.

1. Design that never goes out of style.

One of the greatest advantages of this diamond cut is its longevity, thanks to its unique design.

Although it was first made more than a hundred years ago, its popularity remained and endured.

When a new cut was introduced in the early 2000s (thanks to Edward and Joop Asscher), its popularity even got a resurgence.

With any color and clarity, the stone mostly in a ring form will suit any hand or finger.

2. Beauty and brilliance beyond compare.

With its number of step-cut facets, this diamond cut is considered as one of the most brilliant and beautiful cuts ever made.

Both the standard and royal Asscher cut to give off a kaleidoscope of colors with an endless pool of sparkle because of its many facets. Somehow, you can associate the shape and number of facets to a diamond’s brilliance.

Because this cut is delicate and complicated to do, an Asscher-cut diamond remains rare to date. Its many facets are said to be pretty hard to do and accomplish. So if you plan on buying or ordering one, make sure that the jeweler or gemstone cutter is an expert.

Some popular celebrities who own or once owned Asscher cut diamonds include Elizabeth Taylor, Gwyneth Paltrow, Pippa Middleton, and Jessica Alba.

Apart from diamonds, other precious gemstones can also be an Asscher cut such as sapphire and aquamarine.

As opposed to its advantages, however, there are some bumps of disadvantages you will encounter with this stone cut.

An Asscher cut diamond of 1 carat may appear smaller when compared to the same 1 carat of a round cut.

Moreover, the Asscher cut can be more expensive to other shape cuts because of how rare and complicated it is to do.

But when taken into perspective that it is very rare, somehow one can understand how valuable it truly is.

Once you decide to give it a try for its beauty and brilliance, Dallas’ finest diamond dealer Shira Diamonds is your best store option.

More from Shira Diamonds
How Safe is Buying Diamonds Online?
When Did Diamonds Become Popular?