Being in positions of wealth and influence, celebrities adorn some of the world’s most expensive jewelry.

Whether it is by their purchase or through sponsorships, big brands always go with big stars.

The same is true for engagement rings as some of them have displayed expensive pieces.

The Diamonds Celebrities Use

Celebrities always have easy access to the most exclusive things and experiences. Their status and their wealth allow them to enjoy many things that we common folk don’t have access to.

When it comes to diamonds, they often want and can have unique cuts, big diamonds, or those that sparkle the most that many people would never be able to afford in their lifetime. 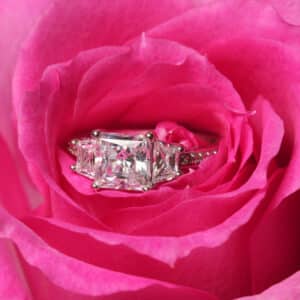 One of the most popular cuts that celebrities use is the round cut because they appear larger when they sparkle. They work well displayed on prongs, which gives them the illusion of being more prominent.

The oval and the emerald cut are also popular choices because they give the illusion of size.

One of the biggest cuts celebrities wore was the marquise cut diamond, which became popular during the days of King Louis XV.

This diamond has a thin and elongated shape. It is not very common, but it’s cut makes it look like a huge stone. Pair it with a halo of smaller diamonds, and it appears even more massive.

Many celebrities like sporting rare cuts of diamonds due to how hard it is to get them.

This uniqueness adds a bit more flair and a bit more value to the ring.

One of the rarest cuts ever made is the Jubilee cut, which was used as a gift to Queen Victoria of England during her 50th anniversary.

It is a hard cut to replicate as it only works best with large diamonds.

Another rare cut is the Lily cut diamond, which Louis Vuitton has used in some of his designs.

This cut is always associated with high fashion since its creation in 2007. However, its design comes at a cost, with the diamond losing a lot of its size, so large carat sizes are rare.

Another cut that found popularity thanks to celebrities is the Royal Asscher cut.

Due to the difficulty of creating one, it is tough to find. There are less than 75 people on earth that can cut a perfect Royal Asscher.

Several factors influence how much a diamond sparkles. The general rule is that the more facets it has, the more it reflects light. This is why round brilliant cuts are trendy among celebrities. A gem’s quality and its elements also affect how well it can sparkle under the light.

Aside from the brilliant round, there are other great choices for sparkle:

The 5 Most Expensive Celebrity Engagement Rings 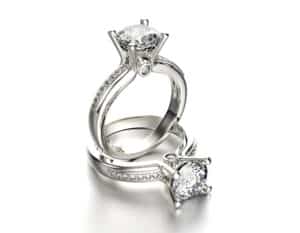 A lot of a diamond’s price also comes with its size.

In this list, we’ll find that celebrities who sport the most extravagant engagement rings also sport the biggest diamonds.

Related: Anything You Need to Know About Asscher Cut Diamonds

Whether you want an asscher diamond ring or a simple wedding diamond, Shira Diamonds will help you choose the best for you.

Give us a call to know more.