The History And Meaning Behind October’s Birthstones

A birthstone is a gem that is associated with a particular month. Each gem has its unique meaning and history, and a lot of people find an interesting link between their lives and what their gemstones say about them.

In the past, gemstones were always synonymous with good health, prosperity, and fortune. Now, we have different and complex interpretations and understanding of what our birthstones mean. Shira Diamonds focus this time on the history and meaning of October’s birthstone.

Like several other months, two stones represent October, Tourmaline and Opal. They both have distinct looks but have a commonality: both represent a mix of colors or gems encompassing many colors. Gemologists usually identify them by their unique combinations, and these make them highly prized.

The title of the rarest birthstone is one that is often in contention among experts. Some believe that the rarest gemstone would be the one that is rarely for sale. Others believe it to be the most flawless expensive gems that rarely see the public eye.

Price can be misleading. The value of gems usually comes with supply and demand. Even precious diamonds are in abundance in the market. For this title, we choose the gemstone that is the hardest to find. 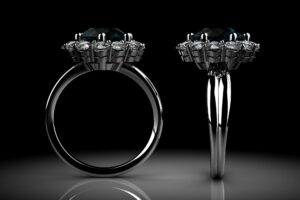 Russians discovered alexandrite in the 1830s at the Ural Mountains. They are exceptionally rare and valuable. Other locations that produce the gem include Brazil, East Africa, and Sri Lanka.

Czar Alexander II is the gem’s namesake. He became the emperor of Russia in 1855, staying in power until his assassination in 1881.

Alexandrite is capable of changing colors, which is a rare characteristic. Gem aficionados often identify alexandrite as the “emerald by day, ruby by night.” Alexandrite changes its colors depending on the light around it. It can be green in sunlight but red in lamplight.

This gem is the stone birth of June, and due to its rarity, jewelers often cut it to save weight. High carat alexandrite sells for exorbitant amounts.

The Most Expensive Birthstones

When it comes to value, there is no simple answer for birthstones. While diamonds fetch a high price, there are also other sought-after gems. These gems, when found in the best quality, can command prices higher than diamonds. The quality can depend on the 4 Cs: Color, Clarity, Carat, and Cut. Here are the four most expensive birthstones:

Gems come in all shapes and sizes. Their value varies with their beauty and rarity. The birthstones of October have been prized throughout history, matching with the likes of other gems. We hope that you learned a lot about the history and meaning of October’s birthstones.

Call us now to get a birthstone of yours!

More from Shira Diamonds
Exclusive Tips To Ensure A Safe Purchase of A Diamond Ring Online
HOW TO MAKE AN ENGAGEMENT RING LOOK BIGGER: 14 EXPERT TIPS