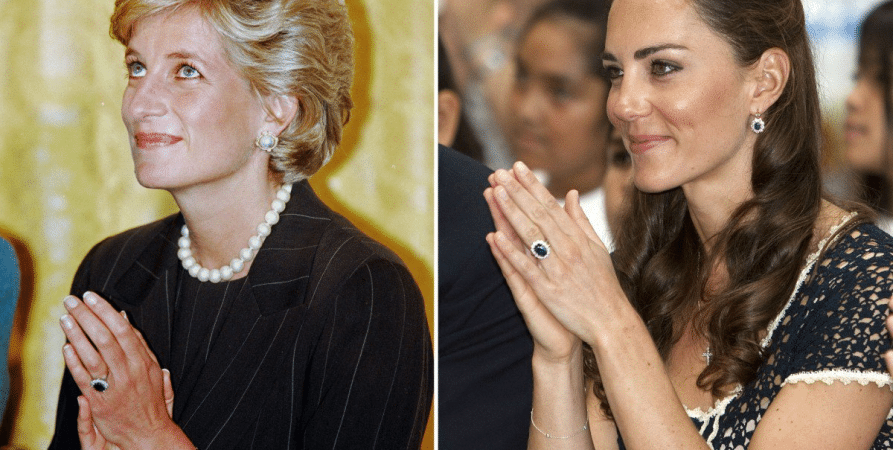 We have taken a closer look at royal engagements and selected five special rings to remember; from Grace Kelly’s emerald cut 10.47 carat engagement ring to the touching story centred around the ring given to Kate Middleton by Prince William, when he proposed during a holiday in Kenya in 2010.

American actress Grace Kelly and Prince Rainier III of Monaco met in 1955 during a photo shoot at the Palace of Monaco, they quickly fell in love and before the end of the year the Prince proposed. To celebrate the proposal, Prince Rainier III originally gave his future wife a ruby and diamond eternity ring from Cartier. Soon, however, he realised that a larger, more traditional engagement ring was a better fit for a Princess and gave her a 10.47 Cartier carat emerald cut diamond ring flanked by two baguettes. This ring was never to leave her finger. Grace Kelly even wore it in the 1956 romantic comedy High Society, where she can be seen polishing the ring as the character Tracy Samantha Lord. In 1956 Grace Kelly and Prince Rainier III of Monaco married in two separate ceremonies: a civil ceremony on April 18th and a Catholic Mass on April 19th. The wedding was hailed as “The Wedding of the Century”.

When the 28-year-old Mary Donaldson went out to meet her friends and a group of Spanish athletes at the Slip Inn Pub in Sydney during the Summer Olympics in 2000, she had no idea that her life was about to change. The man she initially only knew as “Fred” turned out to be both the love of her life and the Crown Prince of Denmark. After three years of dating, the couple announced their engagement on October 8th, 2003. When Frederik popped the question, he proposed with a beautiful emerald cut diamond ring flanked by two ruby baguettes. Crown Prince Frederik chose these stones to symbolise the colours of the Danish flag. At the wedding Mary received an 18 carat white gold ring with 24 square princess cut diamonds that she wears alongside her engagement ring. During the ceremony she also carried her late mother’s wedding ring; it was stitched into the bodice of her dress.

Crown Prince Frederik looks lovingly at Mary and her ring.

Crown Prince Frederik is far from the only prince to give his future wife rubies. Prince Andrew, when proposing to Sarah Ferguson on February 19th, 1986, gave his bride-to-be an engagement ring with a stunning Burmese ruby, surrounded by ten drop diamonds. It is a Garrard ring made from Prince Andrew’s own sketches. The mounting is 18 carat white and yellow gold. Originally appointed official Crown Jeweller by Queen Victoria in 1843 Garrard was been responsible for delivering jewellery to the British royal family for the better part of two centuries. In 2007, the Queen appointed a new Crown Jeweller that was to be replaced only four years later by Martin Swift of the silversmiths Mappin & Webb.

When Sweden’s Princess Madeleine married her New York banker, Christopher O’Neill, on June 8th last year we couldn’t help but feel a bit of extra happiness: Madeleine got a breath-taking, fairy tale wedding with a man who truly deserves her attention. After Madeleine’s relationship to Jonas Bergström ended, she moved to New York, where she met O’Neill in 2010. On October 25th, 2012 Chris proposed to his Princess with a dazzling engagement ring with a four carat square emerald-cut diamond surrounded by tiny brilliant cut diamonds in a so called pave mounting. The ring is said to be worth more than £11,000.

One of the more creative and romantic royal proposals took place around Christmas, 1994 on a ski lift in Switzerland, where Crown Prince Pavlos of Greece asked socialite Marie-Chantal Miller the big question. The ring he gave her once belonged to his mother, Queen Anne-Marie and features an heirloom cabochon sapphire. Before proposing to Marie-Chantal, Pavlos had a heart-shaped diamond added to the ring as a personal touch. The couple was married six months later, on July 1st, 1995, in London’s Cathedral of St. Sophia.

The last ring to be mentioned is a ring that most of us are already very familiar with. The story surrounding this ring however, cannot be told too many times. We are, of course, thinking of Kate Middleton’s engagement ring. For about eight years we all held our breaths as Prince William and Kate Middleton’s love story evolved before our very eyes. The couple first met in 2001 while studying at the University of St. Andrews. Finally on October 20th, 2010 William proposed to Kate with the same engagement ring that his father had given to his mother 29 years earlier. As a romantic and commemorative gesture, he gave her the 12 carat oval Ceylon sapphire surrounded by a cluster of 14 diamonds set in white gold. The whole world watched the spectacular wedding that took place in London on April 29th, 2011.

[Interesting fact: When chosen by Diana for her engagement with Prince Charles, the ring caused a bit of a stir as it was not unique, but part of Garrard’s catalogue, making it available to anyone.]