How to Make a Cushion Cut Diamond Look Bigger?
February 19, 2021

10 Fascinating Facts about Diamonds From Gemologists

Interesting bits of knowledge about diamonds, straight from a gemologist

Why Are People So Enchanted by Diamonds?

If you’re here, you’re probably just as crazy about diamonds as we are! Diamonds are arguably the most well-known precious stone in the world.

They’re everywhere in popular culture: from being the go-to gemstone for proposals to the mysterious Hope Diamond.

This fantastic gem has captured our imagination for hundreds of years.

But what exactly makes diamonds so fascinating? Well, what about the fact that diamonds have been around even before dinosaurs roamed the Earth?

Scientists believe that the oldest diamonds were crystallized deep under the Earth more than three billion years ago!

Have we whetted your appetite for more diamond myths and facts?

Here are ten amazing diamond trivia that you can use to impress your friends and family:

A Quick Dive Into the History of Diamonds

Here are some interesting trivia about how people have revered diamonds through the ages.

The “Birth” of a Diamond

The first question that most people ask about diamonds is, “How are diamonds formed?” Diamonds are formed when carbon atoms deep within the Earth are subjected to immense heat and pressure, resulting in a chemical change.

These carbon atoms would need approximately 725,000 pounds of pressure per square inch (psi) and a temperature of around 2000–2200 ℉ to crystallize and turn into a diamond.

When in Rome (and Greece)

Diamonds have been coveted and prized even during the Ancient Roman and Greek times because their cultures believed that diamonds had a connection to their gods.

Both Romans and Greeks supposed that diamonds were made from the tears of gods. Romans even held the belief that Cupid’s arrows were tipped with diamonds.

When They First Became a Girl’s Best Friend

While it is common to propose with a diamond today, it wasn’t always the case.

The first recorded instance of a diamond ring being used for a proposal was in 1477 when Archduke Maximillian of Austria proposed to Mary of Burgundy using a gold ring set with an “M” spelled out with diamonds.

A Peek into the World of Today’s Diamonds

Have you ever wondered how gemologists determine the value of a diamond? We’ll give you a few interesting facts.

A Rainbow’s Worth of Colors

Most people are familiar with the classic diamond: clear and colorless. However, did you know that diamonds come in a wide range of colors?

However, colored diamonds are rarer than colorless diamonds, and they can be more expensive.

Red is the New Black

Even within the spectrum of diamonds’ colors, some diamonds are considered to be more valuable than the others.

Naturally-occurring red diamonds are the rarest diamonds globally and are subsequently the most expensive and sought after.

A red diamond discovered in Brazil in the 1990s, known as the Moussaieff Red, is currently considered one of the most precious diamonds anywhere on Earth.

We use four factors to determine a diamond’s value: cut, clarity, carat weight, and color. The cut refers to how much light is reflected inside the diamond. Clarity is how clear the diamond appears.

Carat weight is how heavy the diamond is, and color refers to the shade of the diamond. Expert jewelers such as ourselves will use these four factors to determine the market value of a diamond.

Diamonds are categorized into two basic shapes: round and fancy. Diamonds are cut by expert jewelers to fit into jewelry pieces.

Round refers to the traditional circular shape that most people are familiar with. Fancy shape refers to any other shape that is not round, such as heart, oval, pear, or princess.

The Science of Diamonds

Did you know that diamonds have a fascinating science around them? Here are some of the trivia we love best about the science of diamonds.

The Only Thing That Can Defeat a Diamond

Diamonds are the hardest natural substance known to man. It’s so hard that only a diamond can scratch another diamond’s surface.

They also have very high melting points and boiling points, which are 6,420 ℉ and 8,720 ℉ respectively.

Since they’re virtually indestructible, we’re not surprised that diamonds are used to symbolize everlasting love!

Lucy IS in the Sky

If you’re a fan of the Beatles, then you’re familiar with their hit song, “Lucy in the Sky with Diamonds.” As it turns out, you’re not the only Beatles fan around!

In 2007, astronomers at the Harvard-Smithsonian Center for Astrophysics discovered what is essentially a planet made almost entirely of diamonds.

Science is Your Friend 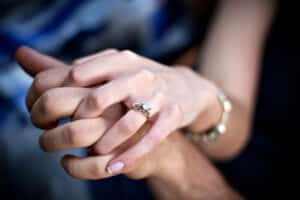 We all know that a diamond is pricey, but let’s be honest, it’s not always practical or affordable to get one.

Luckily, you can still give a diamond to that special someone thanks to lab-grown diamonds!

Lab-grown diamonds are virtually indistinguishable from naturally formed ones. You need to look at them under a microscope to see the difference in the crystalline matrix.

Thanks to science, diamonds have become much more affordable and accessible.

We’re sure that these little pieces of trivia have made you fall in love with diamonds even more.

If you want to know more diamonds, we here at Shira Diamonds will be happy to hear from you!

6 Unique Wedding Rings Perfect For The Bride To Be

The 5 Most Expensive Diamonds in the World